Tristan adopted an Eclectus Parrot named Joey which turned out to be a rescue. Joey, who is probably around 9 years old, had been left in a house that one of Tristan’s friends moved into. The bird apparently had not ever had its beak trimmed and there was nothing in its cage for it to chew on to keep its beak trimmed back, so its beak had grown out so long that it was rubbing the feathers off Joey’s chest. Joey’s beak would have punctured his sternum and killed him if it had been left untrimmed much longer. The feathers on his head look good, but the rest of his feathers are scraggly and rough because he couldn’t groom himself with his long beak. He also hadn’t bathed himself or been bathed in who knows how long, so he smelled bad as well. Tristan called the vet on our way back to her house with Joey, and fortunately they had an opening within an hour, so we drove straight over to PetsMart and got Joey a new cage and lots of chew toys before taking him to the vet.

Joey was very well-behaved in the carrier as we drove around. He imitated noises from video games and gave us an occasional squawk. It didn’t take long after we got into PetsMart for people to start noticing him making cute noises. He squawked loudly at the sight of dogs, which really got the attention of the other shoppers. Once we got to the vet, Tristan turned the carrier around so the door was against the back of the bench so Joey wouldn’t react to the dogs in the waiting area. He would peek at me through the holes in the carrier, but when I first tried to photograph him peeking at me, he would back away to the other end of the carrier and then come back up and peak at me again with on eye, back off and peak at me again with the other eye. I finally got some photos of him peeking at me, but it was like a game to him.

His next adventure was his absolute refusal to get in the basket so the Vet-tech could weigh him in the exam room. He got on Tristan’s shoulder, then I got him on my arm, but when we got the basket near him, he ran upon my shoulder, then ran back and forth from one shoulder to the other ducking the Vet-tech. Then he got onto Tristan’s arm and climbed up and took refuse on her shoulder until the Vet came in. The Vet stood there in shock for an instance and then said she had never seen a beak that had grown out that long before. As we gave the Vet as many details as we had learned about Joey in the hour we had him, he sat on Tristan’s shoulder and groomed her until he tore off her pesky glasses that were getting in his way. The Vet got him wrapped in a towel and took him back to trim his beak and draw blood so they could test him for communicable diseases. When the Vet-tech brought him back in to us with his newly trimmed beak, Joey was happily chewing on the towel, something he hadn’t been able to do for most of his life.

He was pretty traumatized, and rode home in total silence, looking tired and worn out from his big adventure.  When we got him home, he sat on a roost and posed proudly for me showing off his newly trimmed beak, then he watched me put his new cage together. As he watched Tristan and I fill his new cage up with things to climb on and lots of toys to play with and chew on, he started making cute noises again. When we put him in the cage he first checked out the water dish, and then started messing with the food. At first he turned his head sideways to compensate for a long beak, then he discovered he could pick up the food without cocking his head and started happily rooting around in the mixture of seeds, nuts and bird crackers able to eat normally for the first time in many years. 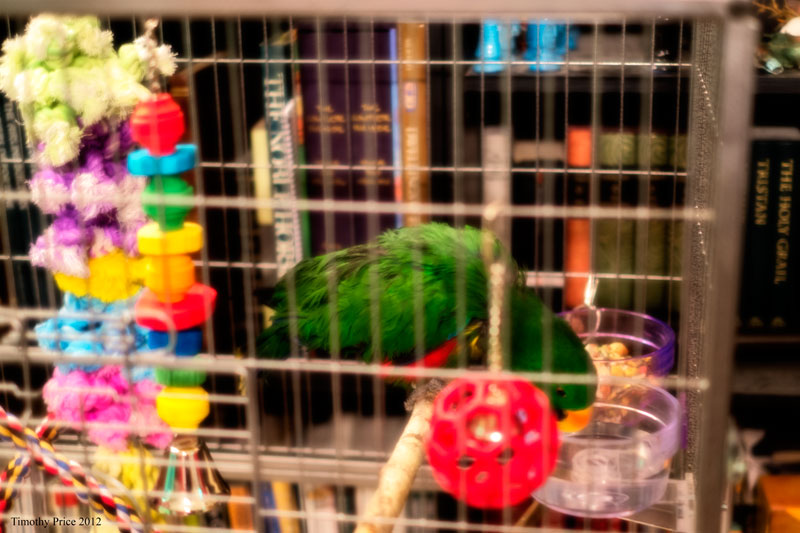