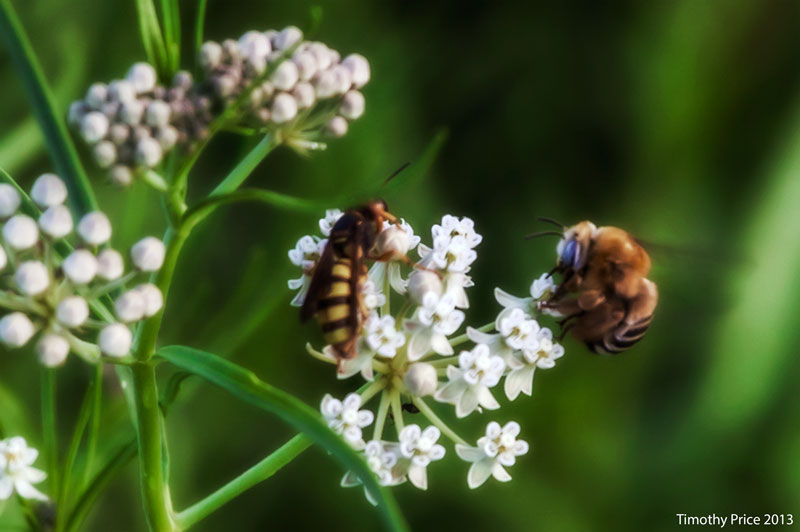 A bee and wasp were foraging on the same plant, which I found interesting. The double-winged damselflies are out, and a tiny crab spider was hanging out on a red rose.

To show Sarah the ghost photo from last week, I searched for “Ghost” in the search field in the upper right-hand corner of the page which brought up “Ghost Under a Full Moon” followed by “Stretch 2004 — 2013 RIP”.  Sarah noticed that the ghost in the left-hand edge of the photo looks like the young Stretch in the photo below it from the search. The photo of the ghost was taken near Stretch’s grave.

After another “Monday! Monday! Everything breaks on Monday!” Monday, I came home, got out the macro lens, and went out to see what the small world in the garden was up to. The most cooperative critters were Bartle Bee, Evil the Boll Weevil and a tiny, curly cucumber tail. 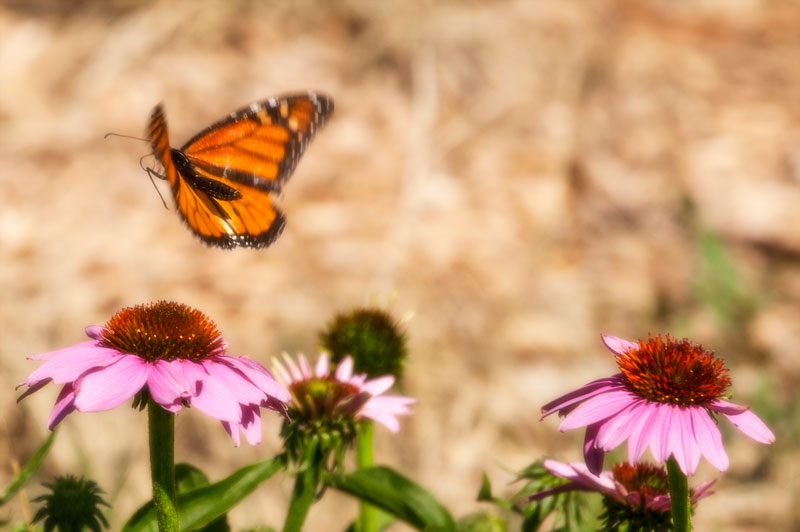 Apparently someone of the royal family in England had a baby recently who at some point might be in line to be a monarch. I see bits and pieces about this on Internet news, but I don’t pay enough attention to know who is who. I don’t really understand why the American news media finds reporting on the birth of this baby to be a higher priority than reporting on all the real issues we need to address in the US. We fought and won a war of independence against Britain over 200 year ago, so why all the hubbub and distractions over a baby who will never make a difference in our lives?

Now when it comes to a Monarch butterfly (who most people do not give a flying pheromone about) showing up in the early morning hours, teasing me in various areas of the property until it found a delicious echinacea to distract it long enough for me to get some decent photos, is at least blog worthy. Monarch butterflies migrate thousands of miles and pollinate plants making them quite useful. But unless you are a weirdo like me, you have probably followed more news on the baby British Monarch, than an orange an black winged Monarch butterfly fluttering around in your yard.

What was interesting about my Monarch photo shoot is that in the photos where I had full, bright, early morning sun, the butterfly glows in the bright light. In the photos were the clouds were blocking the sun, the photos are pastel and have a more painterly look to them. 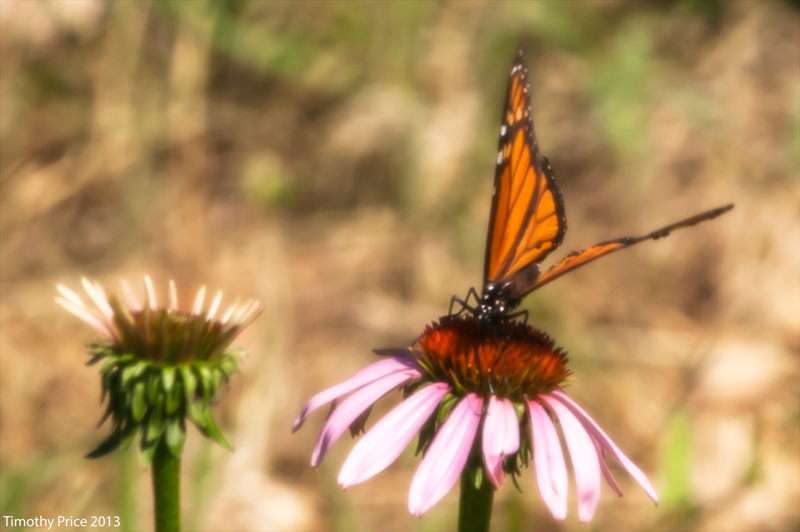 I took this photo just after midnight on Friday morning. It was so windy and so much rain on Friday night, that the lightning was never clear, just bright flashes and loud crashes. Since the clouds are building up again, I thought I better get the blog posted before the storm hits and we lose power again. We got home at 4:30 pm yesterday and by the clocks that keep a memory of the time they went off, the power had been restored just an hour before we got home, which, if correct, means we were without power for 21 hours. The June bugs and roses are happy after the heavy rains, and Rosencrantz was enjoying a patch of catnip in the late afternoon light that was falling between the thunderheads building up in the western skies. 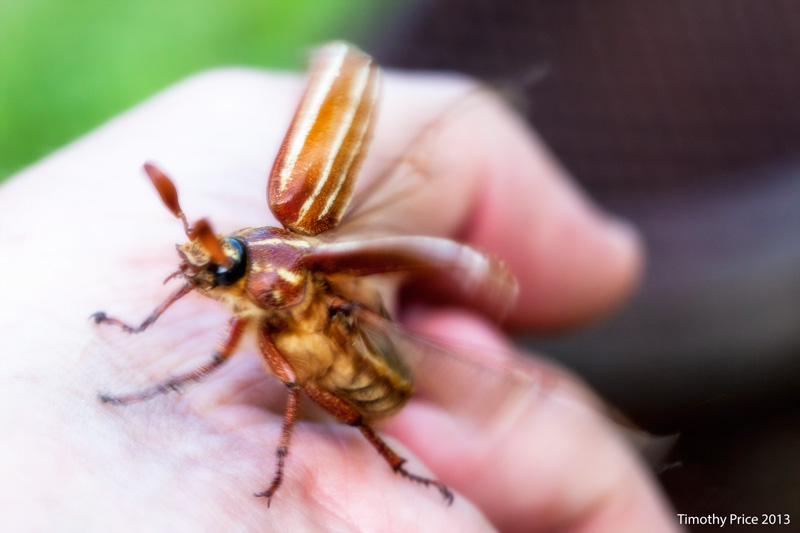 We had been without power for 15 hours when we left for Tristan’s and David’s to charge devices and get on the Internet. About 7:00 pm last night very high winds and pouring rain that took out the power. Puck was out during most of the storm and finally came in soaking wet about 8:30, bringing a good amount of the 2 inches of rain we got with him. He reluctantly posed for photos illuminated by our flashlights, but finally gave me a nice “Chat Noir” pose. The neighbor’s corrals and arena were still flooded this morning, and the horses were fed on the high spots along the edges. The morning sun was brilliant in the fresh air, and the sunflowers and bees were happy after the rains. 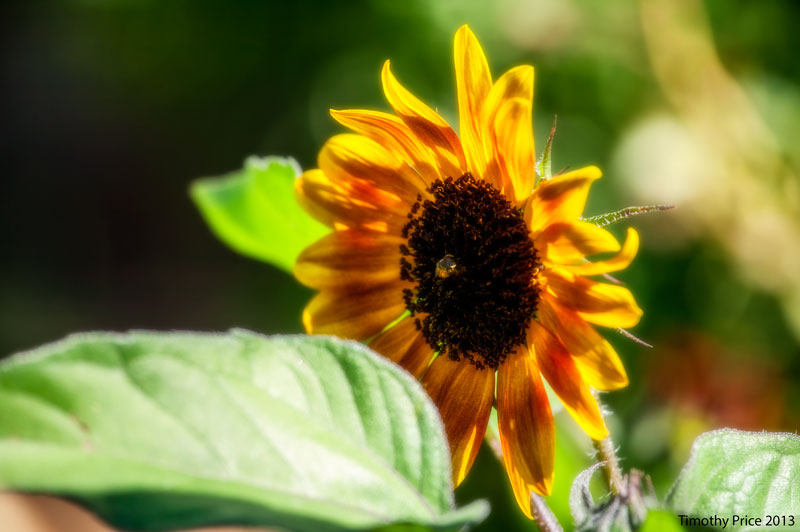 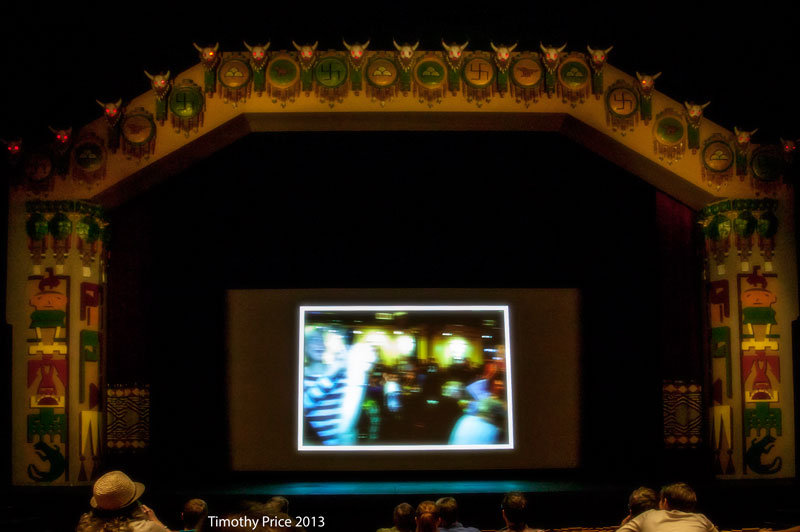 We went to the showing of the top 13 films from the Albuquerque 48 Hour Film Festival in the historic Kimo Theater on old Route 66 downtown. The participating teams get topics and then have 48 hours to write, cast, film, and complete final production of their movies. The common elements in each movie were a map, the phrase “You’re so smart!” and the name Roman Rodriguez. The atmosphere was festive and the films were very well done and enjoyable to watch. I hadn’t been in the Kimo in a very long time. It’s a great theater with its glowing skulls and depictions of Anasazi symbols. 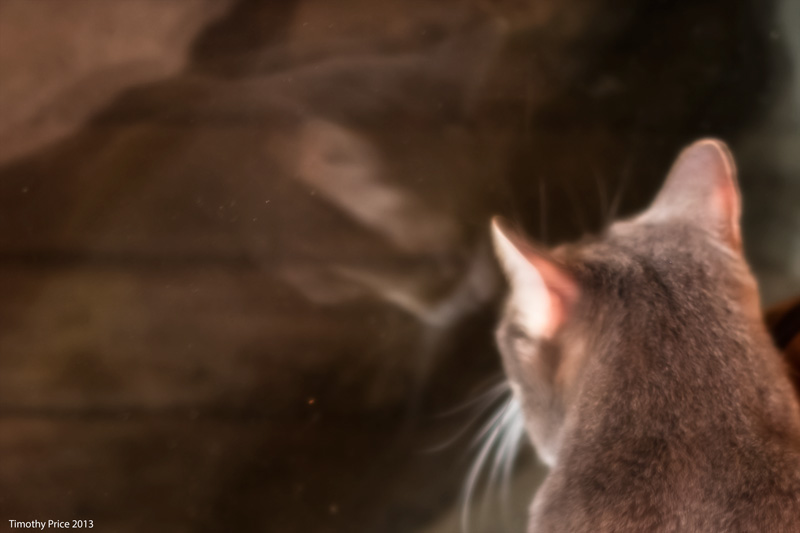 Random images from Tristan’s and David’s. 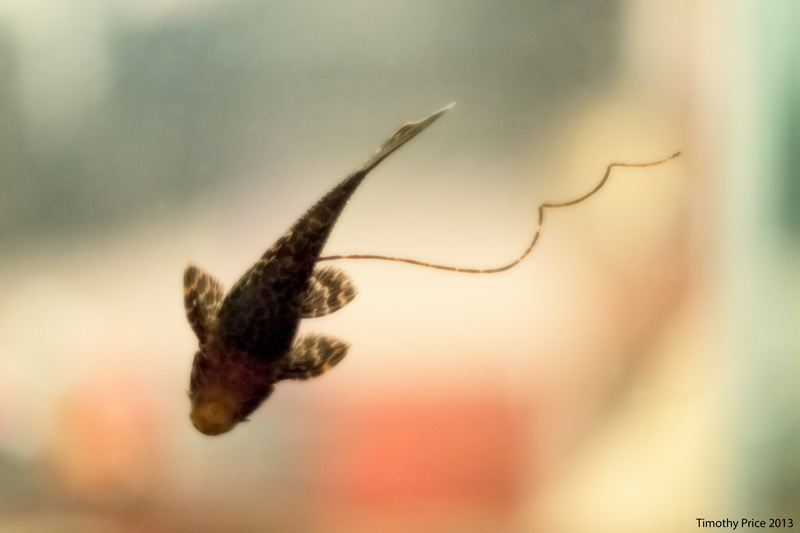 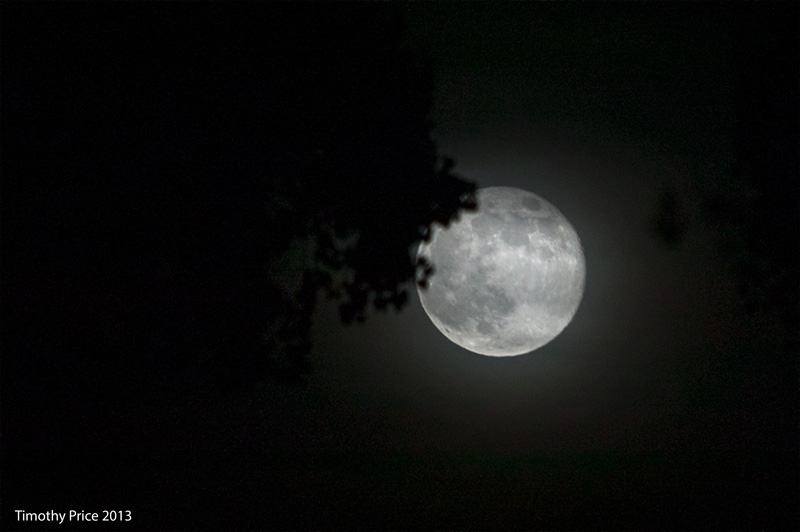 While I was out photographing the full moon, I noticed a lot of plasma in the air by the circle garden. I took a photo and got what looks like a ghost of a kitty or squirrel. This is the second ghost I’ve captured in a photo. The first one was at the Menger Hotel in San Antonio, TX in 2004.

I’ve seen a few bigger butterflies pass by, but with everything being so dry and our butterfly bushes only thinking about blooming, they just continue on their way. This little butterfly stuck around tasting out lamb’s ear and Russian sage.

We watched the final stage of the Tour de France, and the multi-media, light extravaganza they projected on the Arc de Triomphe was spectacular.  If the church could could produce the same quality of multi-media production to illustrate the pastor’s points as the Tour de France’s light show did for the awards ceremony, I might buy into the multi-media projection during the service. Then again, if churches could give multi-media shows half as good as the clouds over the Sandias, they might be entertaining.

A hawk was blending with the insulators on the power pole — good hunting strategy. The bee/wasp in the second photo is as BIG as it looks. I’ve been trying to get a clear photo of this critter for a long time. It never lands for but a split second and zips around very quickly. I finally got it in flight. The Asian lily was backlit nicely just after sunrise, and the clouds were quite entertaining throughout the day. 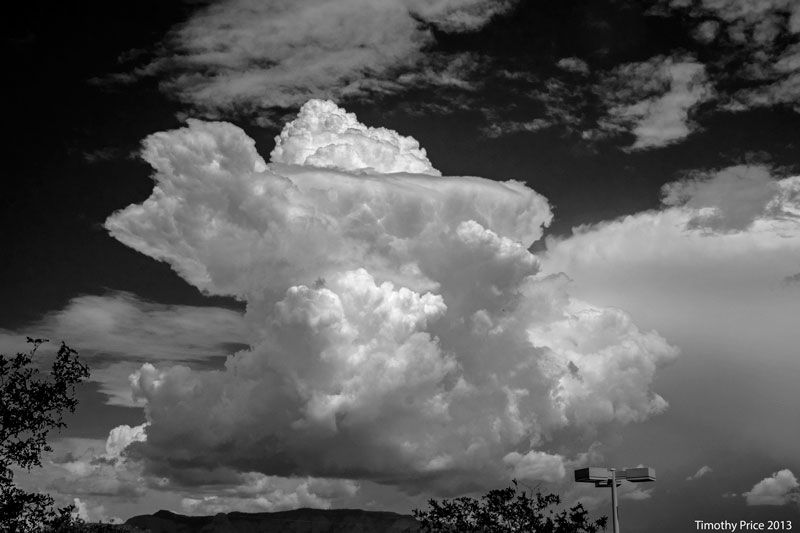 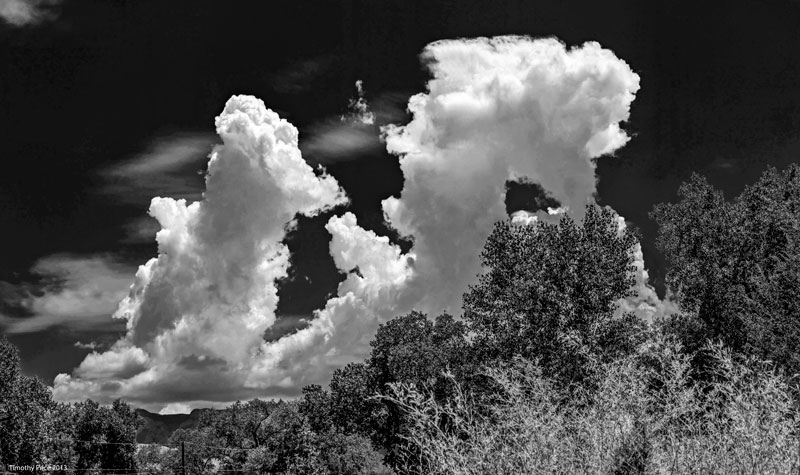