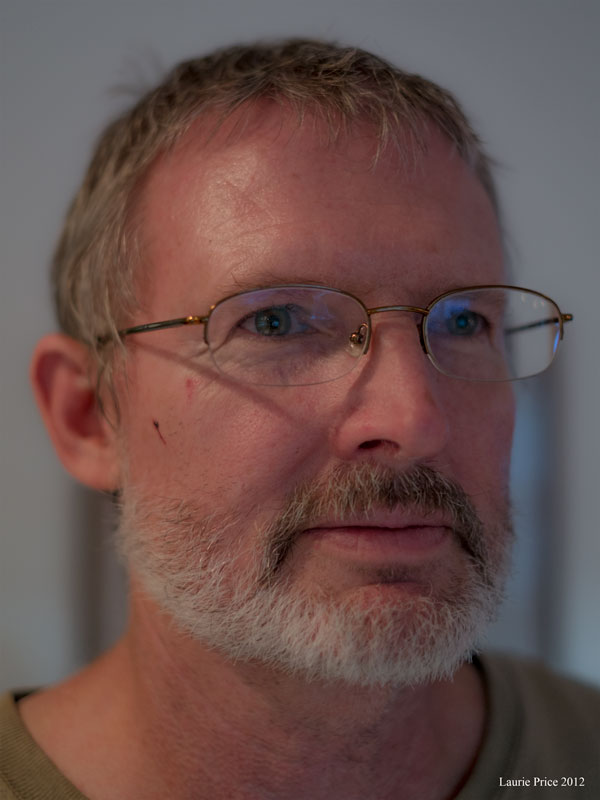 While working on the bathroom remodel today, I got scratched and bruised, so the by the end of the day I looked like a caveman. Laurie wanted to do a photo of me to show my scraggly look with scratches and dried blood on my cheek.  The kitties come in at times with scratched up faces, but I don’t think they’ve been out fighting with bathroom cabinets. The second photo is the what the bathroom looks like after fighting with it all day. I may not look like it or feel like it, but I think I won the battle.

The leaves are turning yellow, and the last two photos are of the Zipper Spider multitasking. She is eating the wasp she had wrapped up and hanging in her web yesterday while spinning new silk to repair her web. 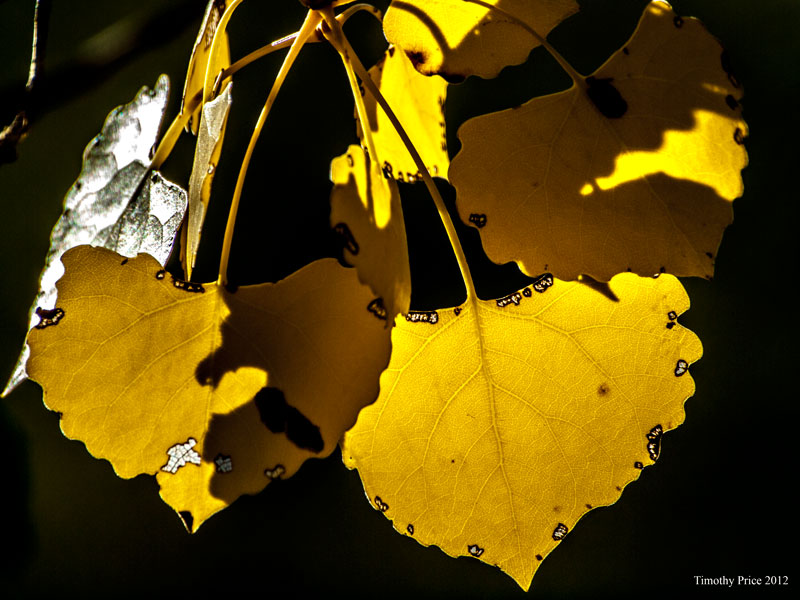 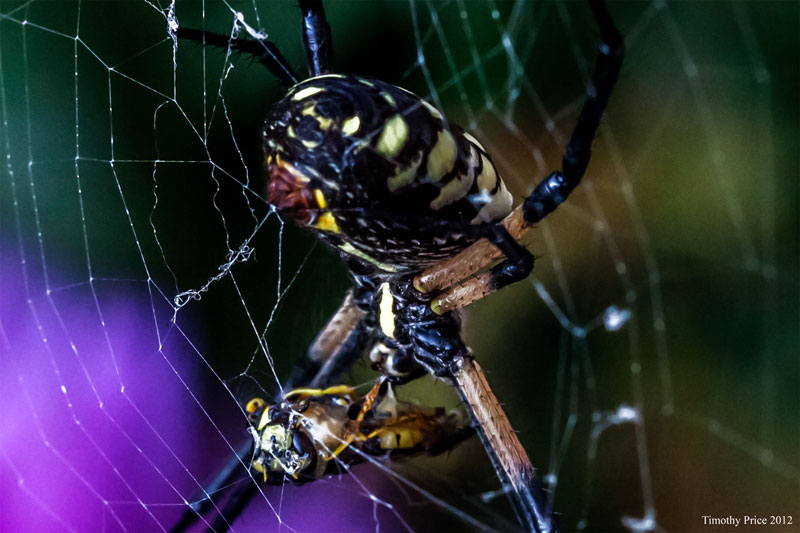 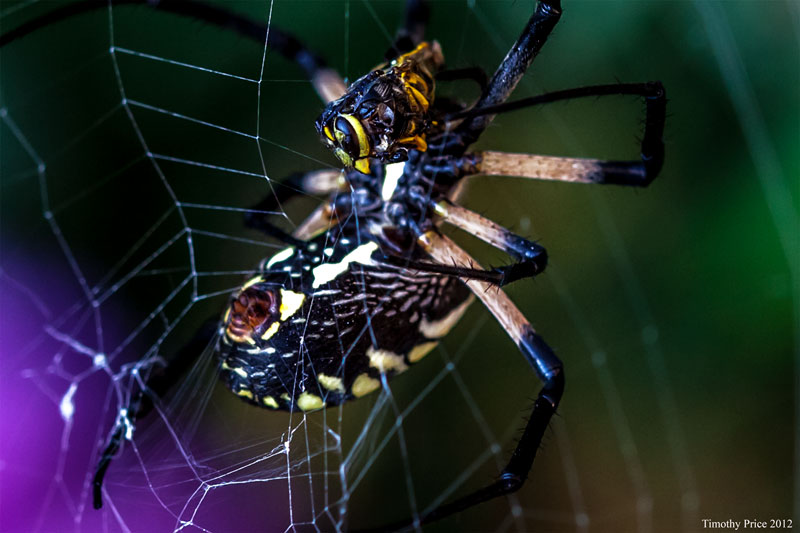 The Zipper Spider has been quite successful catching prey today. Laurie noticed the underside of the Zipper Spider looks a lot like the colors and patterns on the wasp the Zipper has wrapped up like a mummy. The spider had several insects fully wrapped up in silk hanging in her web, but this one was partially exposed. The second photo shows the pattern on her underside — we are speculating that the coloration of the  Zipper’s belly may help her attract the wasps.  The third photo shows her eating an insect that is probably a wasp that has been turned brown by the digestive effects of her venom.

On our way in this morning some of the towers on the Sandias looked like they were built in the clouds. I took the photo through the windshield at Alameda and I-25. After cropping the image, the towers ended up looking more like spires on a castle in the clouds than radio towers.

The Conservancy still has the irrigation water cut off, so I haven’t been able to irrigate one of our rose gardens that we don’t have on a drip system for a month now. While some of the plants are starting to really suffer, the roses are hanging in pretty well as you can see from the rose in the last photo. One of the nice things about roses is that once they are established, most of them are fairly drought tolerant. 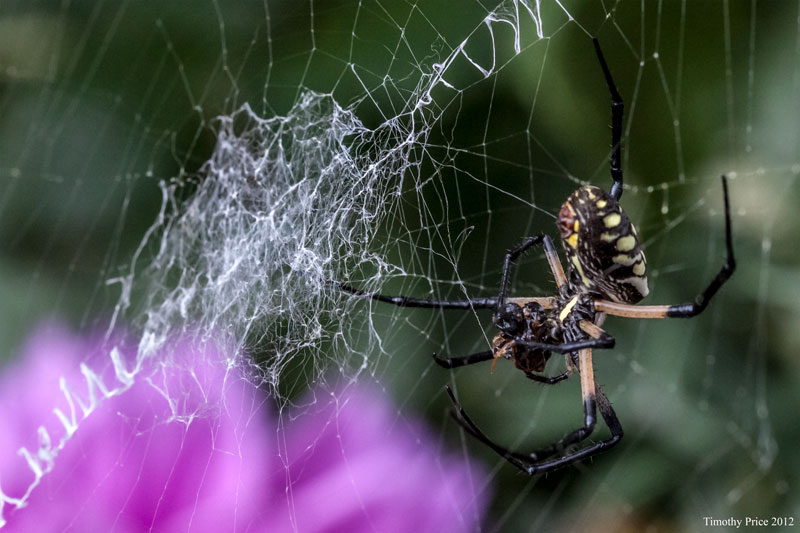 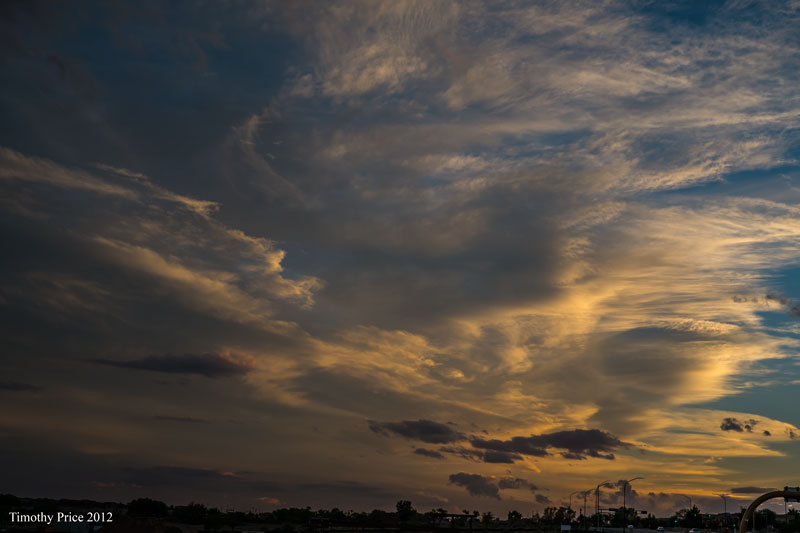 The clouds put on a nice show on the way home tonight . I was trying to capture the golden glitter reflecting off the city in the photo of the Sandias, but the light looked much more glittery in person. 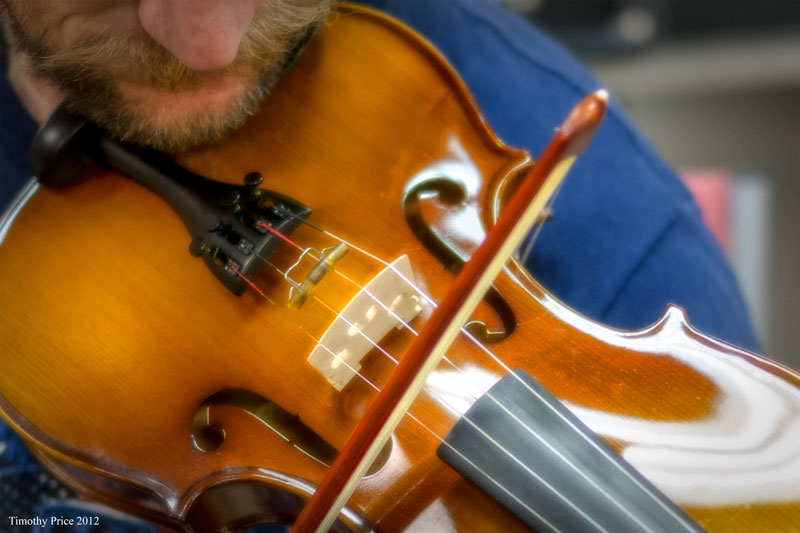 After attending a lecture on “The Holy Icons in Crusader Cyprus” at UNM this evening, I photographed members of the church’s chamber orchestra who were at bell choir practice — they were about a quarter of the orchestra, which just happened to be a quintet.

There never seems to be a shortage of interesting people hanging around downtown. 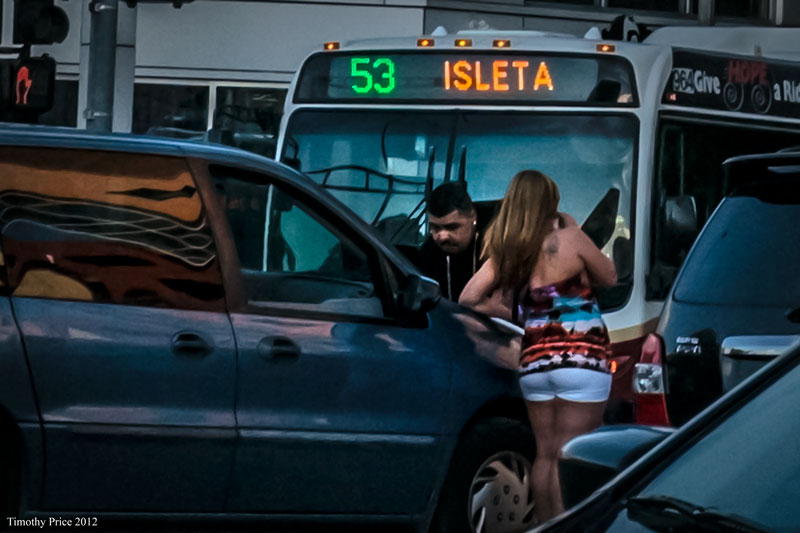 We drove home in a dust storm with a rainbow. The rainbow persisted most of the way home.

I got up at 3:00 am to turn in the water, but the there was no water to turn in. I went out this evening to turn in the water, and still no water. The empty ditch left me seeing red.  The peach trees lose no time turning on their fall colors. The temperatures have been in the mid to high 30’s every morning this week. The roses like the cooler temps.

Stretch was “snaking” me on the stump this afternoon, and aliens disguised as a weather balloon were floating high above the moon — the low sun made it look like a jellyfish. I had to get out my 600 mm lens to get the photo. Louise Estes, one of the new roses we got in the spring, finally got over transplant shock and decided to bloom.  The low sun shining on the cottonwood was a nice golden yellow on the first day of Fall. The spider’s web is on the irrigation gate. 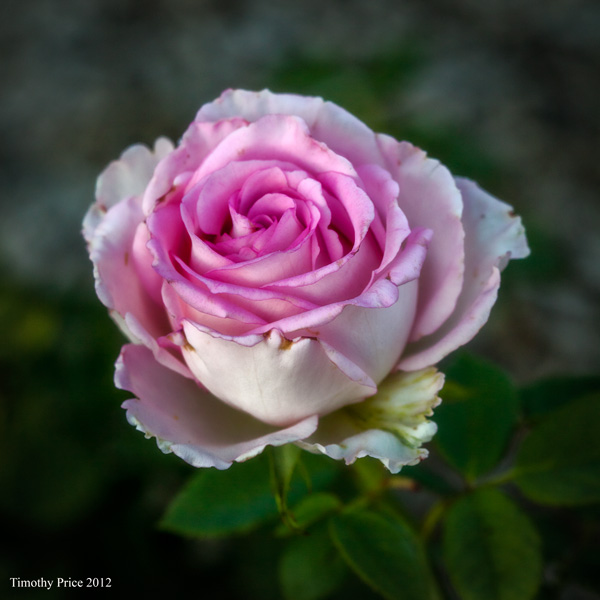 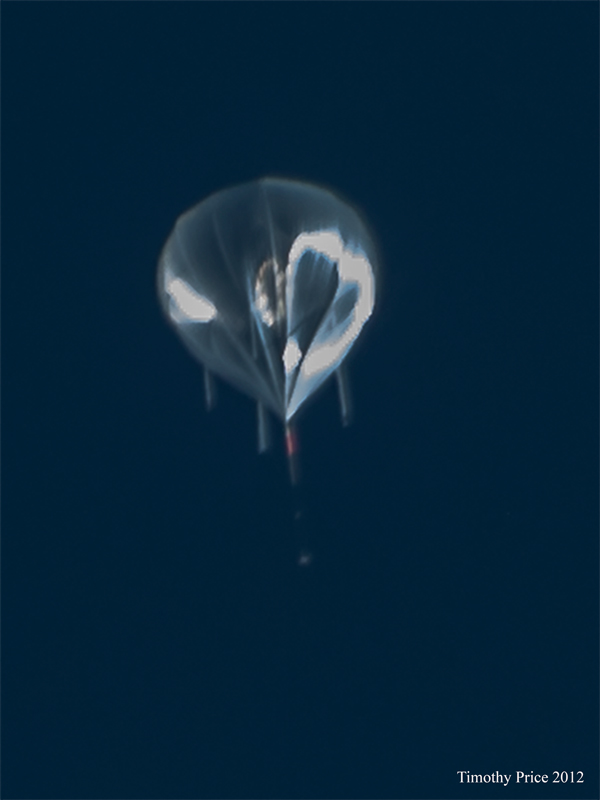 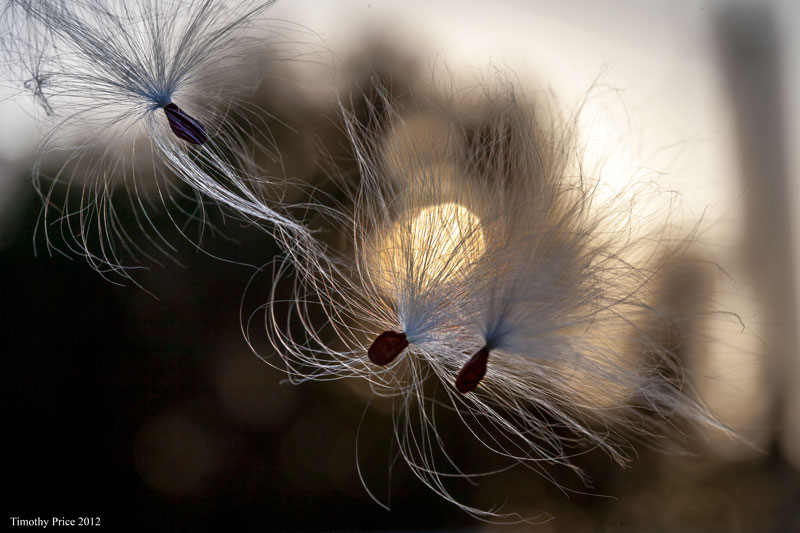 On the last day of summer, plants were putting out seeds before the cold sets in.  Although these seeds are from some pesky weed, they are  quite photogenic. 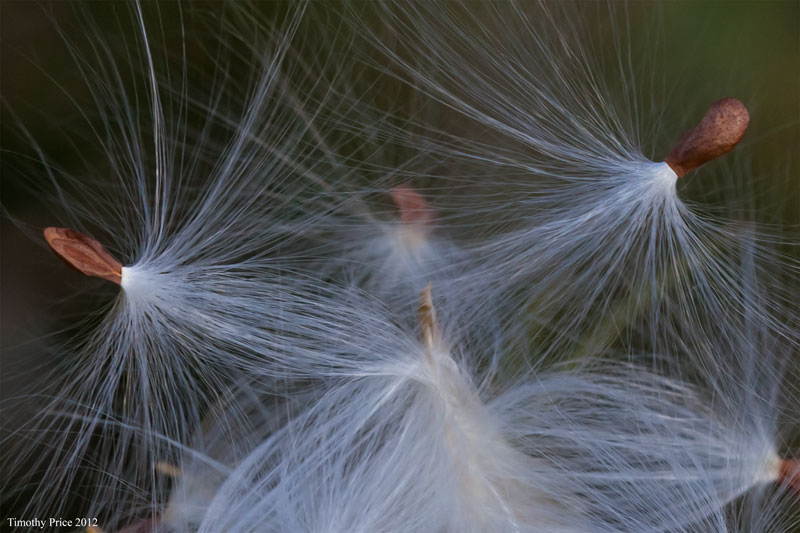 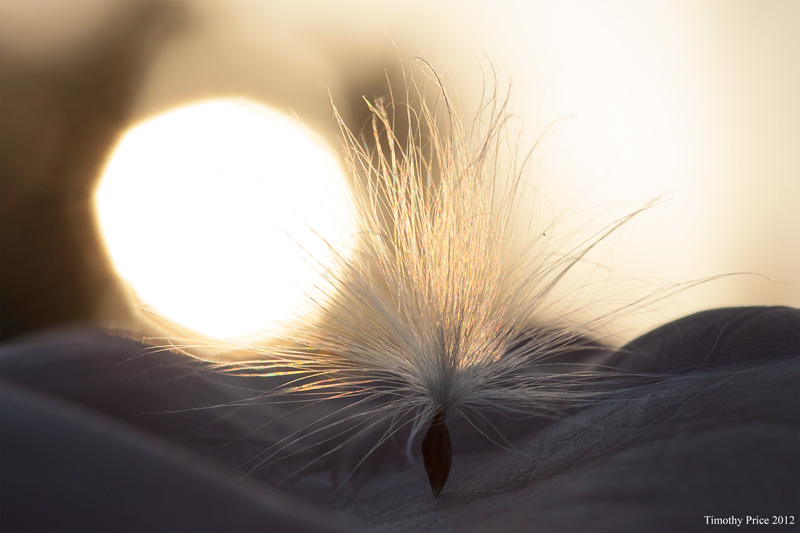 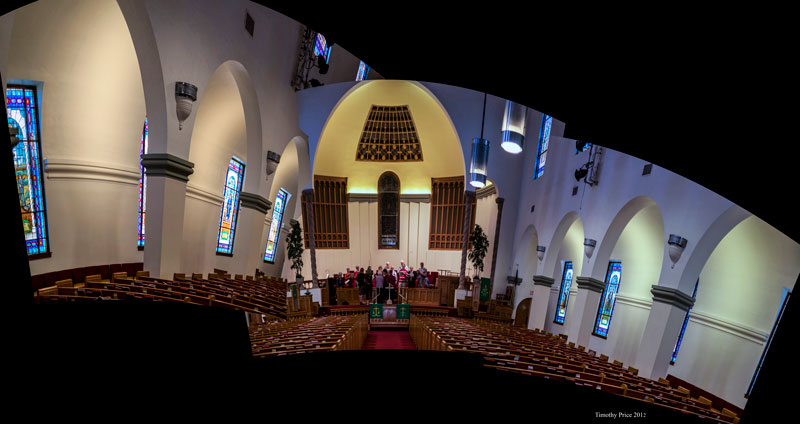 When this panorama went came out all cockeyed, the result reminded me of Dali. Laurie thought it was more cubist looking, and I guess she has a point. If you lean more cubist, then I suppose it would be Picassoesque. Whichever “…esque” you choose, the result is interesting. I’m not sure why the program put the three images together all “Dali/Picasso” like, because the individual frames all look like they should line up perfectly — obviously something is out of whack.