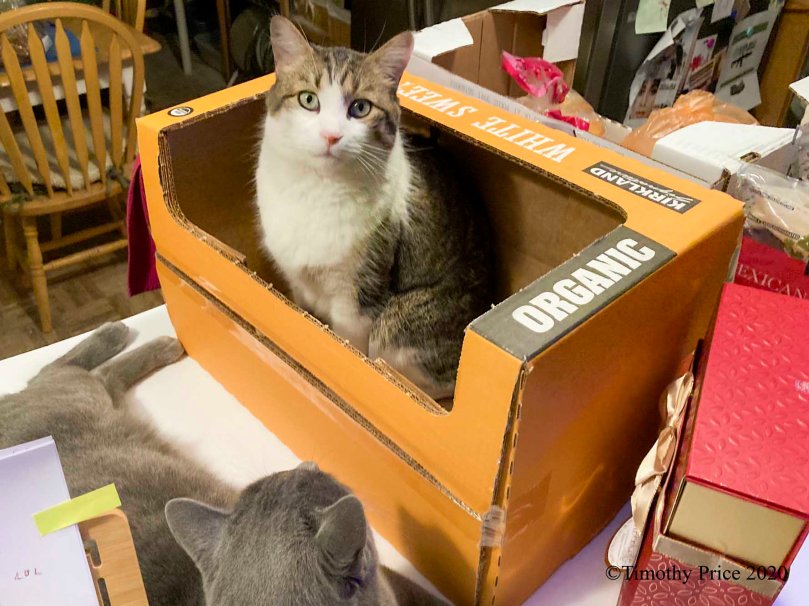 It took Spunk only about *three days to return to his “catankerous” self and his normal routine of pacing around the house at all hours and killing his tails. Although, instead of placing his tails on the counter to protective all of us, he is taking them to the couch where he is sleeping to protect himself. After his three-week ordeal in a parallel cataverse, or kitty purgatory if you like, he feels like he needs to keep all the kitty tail protection for himself.

To celebrate Spunk’s Zero to Spunk in 3D*, I’m posting a parody of Candy by Iggy Pop with Kate Pierson called Kitty.

Teagan Riordain Geneviene of Teagan’s Books came up with the idea of making the parody of Candy. She sent me the idea for the parody with the lyrics for Kitty’s part (Kate Pierson’s part) and the duet with Iggy and Kate at the end. Teagan asked me to write lyrics for Iggy’s part in the beginning of the song. I had not heard Candy before, so I looked it up, listened to it, and wrote the intro lyrics based on Teagan’s prompts. I processed the music and then learned Iggy’s parts the best I could. It turned out to be a difficult song, but I finally got it to work. I recorded my part of the parody and sent the music file to Teagan. Teagan has a beautiful voice, however, she discovered that Kate’s part was out of her range, and with all the other stuff she had on her plate, she could not work in the time to record Kitty’s part and get it to her liking.

I understood completely. However, Teagan’s idea for the parody was brilliant, our lyrics were excellent, and I didn’t want to let a really good parody go to waste. Suzette Presti, who is a professional singer, was gracious enough to take up the challenge of singing Kitty’s part. I sent her a recording with the music and my vocals, she recorded Kitty’s parts and sent me her recording. I mixed her vocals and my vocals with the music and voilà! Like a musical Frankenstein, Teagan’s wonderful idea for a parody came to life. Enjoy!

Join 3,780 other subscribers
Follow Off Center & Not Even on WordPress.com