Continuing my adventures in film, I purchased a 4X5 Speed Graphic, Press Camera with money I got for my birthday. I wanted a 4X5 that was more portable, but since field cameras are still pricey, I started looking at press cameras, and decided I liked having the choice of using either the leaf shutter in the lens or the focal plane shutter in the body, and having the option to hand hold the camera.

I ended up with this particular camera because the seller guaranteed that everything worked, and he accepted my offer for the amount of the money I received for my birthday. I got it Wednesday, checked the shutters, the movements, the rangefinders, and indeed everything worked. It was pretty dirty, including the lens, so I took the camera and lens apart, and cleaned everything inside and out. Spunk helped and then participated when I photographed the camera — he wanted to point out the camera’s features and how it works. I looked up the serial numbers on the lens and the camera and it’s a Wartime model produced in 1945.

Thursday morning I went out and took four photos, processed them, and then printed two of the negatives before we went to Thanksgiving dinner at Laurie’s parent’s house in the early afternoon. I used Kodak Tri-X 320, but had the light meter set at ISO 400 and processed the film at ISO 400. I used the leaf shutter in the lens set at 1/400 sec and hand held the camera for the shots. The lens, at 127mm, is fairly wide-angle for a 4X5, therefore, in each photo I was trying to get as close to a group of cranes, and then a group of ducks as possible. The cranes and ducks flew so I snapped the photos of them taking flight, producing my first 4×5, hand-held actions shots. 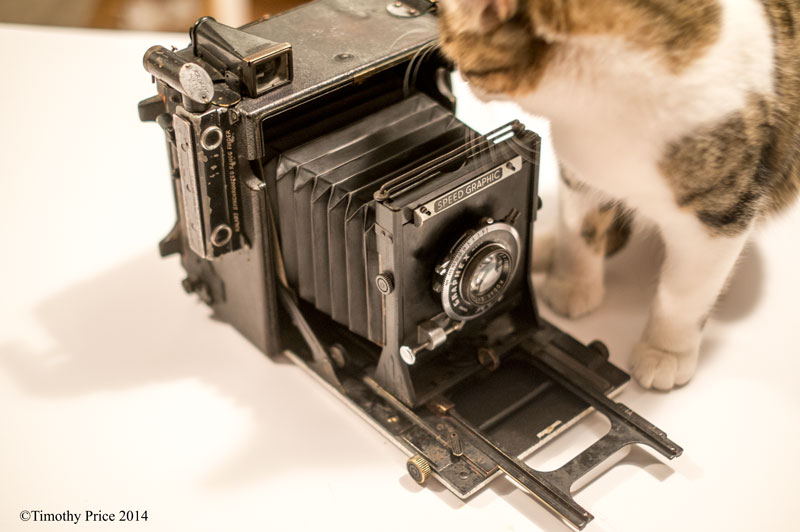