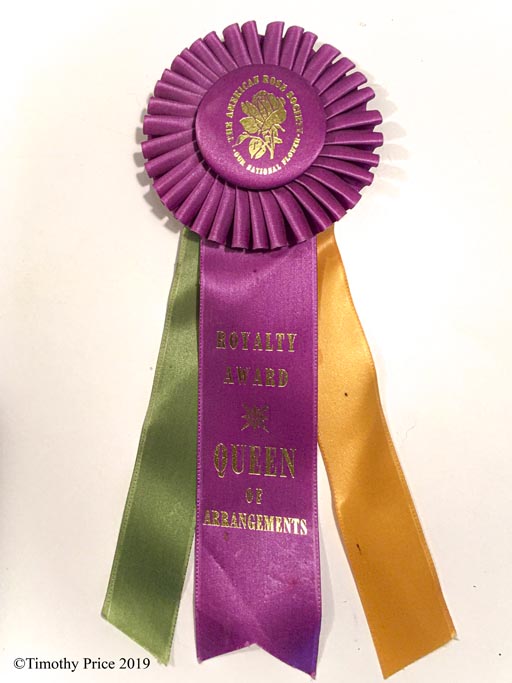 Since we do not spray our roses, we allow natural predators to take care of pests by planting companion plants that help attract predators. When we first started attending Albuquerque Rose Society meetings, we were told we would never win first place or Queen of Show without spaying our roses. We took that as a challenge, and worked very hard on encouraging predators, caring for and grooming our roses without spraying. By 2002 we were entering roses and rose arrangements in ARS rose shows and winning first places, and eventually Tristan, Laurie and I, all three, won Queen of Show with our arrangements. Laurie’s brother thought I was less than manly to arrange roses, so I was rather excited to win Queen of Show, as I knew that would annoy him to no end.

In the current issue of Roses & You: news from the American Rose Society (July 2019), that Susan forwarded to me, the current President of the ARS, Bob Martin, wrote an article titled THE BUGS OF SUMMER. In his article he equates people like us who don’t spray their roses with poisons as lazy people who don’t care for their roses, people like anti-vaxers, and people who don’t care enough to treat their dogs for fleas. Mr. Martin writes:

What to do? Too occupied to take care of their roses this summer some declare theirs to be a “no-spray” garden. This is greeted with the applause of their environmentally-conscious friends, as well as the multi-legged applause of beetles, spider mites, and chilli thrips. The “no-spray garden” – Turning indolence into a garden virtue! I find that odd. Like a rosarian version of the anti-vax advocates we hear voices that claim if we just leave the roses alone, natural predators will arrive to bring the garden back into balance. Really? Do the proponents of these views believe the same of their pets? “My dog has fleas, but I don’t believe in health care or the use of chemicals but will just wait until the dog is back in balance.”

The way we see it, we are not lazy rosarians, as it’s very difficult to produce award winning roses without spraying poisons on them. I also disagree with him on fleas. We don’t treat our cats for fleas using insecticidal flea treatments, either. Our kitties are always licking each other, and we don’t want to poison our kitties trying to kill fleas. Instead, we rub catnip on the kitties, which is quite effective for controlling fleas, and the kitties love it.

As you can see from the photo below of a small sample of awards we’ve won over the years, we have won many First Place ribbons, Royalty Awards, Gold Certificates and Queen of Show for roses and roses we used in arrangements that were not sprayed with insecticides.

Below are samples of some our award winning arrangements and un-sprayed roses from over the years. Note: I took screenshots from posts on my T&L Photos blog for several of the rose photos below —  it was much more expedient than finding the original photos. 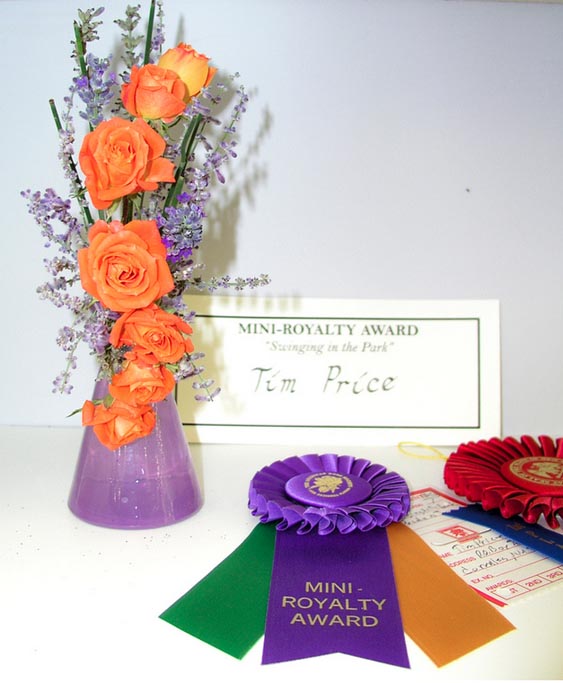 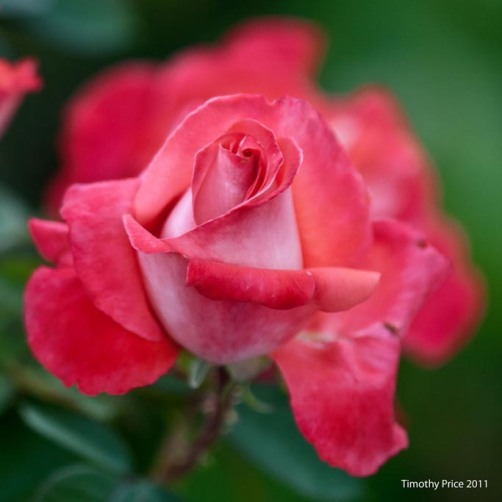