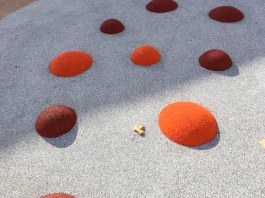 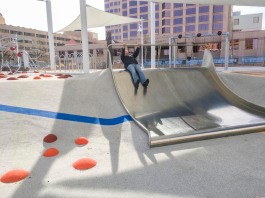 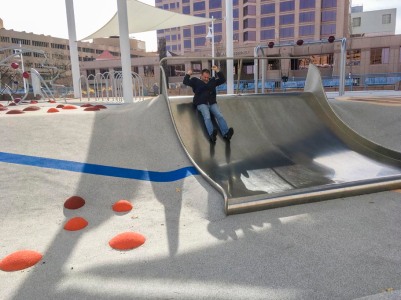 The City opened the scratchy surfaced, knee scraping, palm grinding, bloody face plant playground at Civic Plaza. As I suspected, the gray surface, though cushy, is rough like tarpaper roofing, and the orange and purple bubbles are like 20 grit sandpaper. Kids running and falling on those surfaces are going to get all scraped up.

Click on the photo or the link to see the a full-sized photo and read the poem  http://photos.tandlphotos.com/blog/2017/2/wait

After doing the terminator yesterday, Bruski went for the Steven Seagal look today. The first photo will be Brucki’s new album cover. Now all we need to do is come up with some music.

Today is my 666th consecutive post since I moved to Word Press. The number 666 is dear to me because I woman once called me the Antichrist in a public meeting (I really, really made her mad). Later I used the same formula that Boris used in Tolstoy’s “War and Peace” to add up the numbers that corresponded to the letters in his name to see what they added up to, which turned out to be 666, making him think he was the Antichrist. Guess what? The numeric values of my full name also added up to 666. But it’s all for fun, as Nero was thought to be the Antichrist referred to in the Book of Revelations, and apparently, the Mark of the Beast could be 606 or 616, so all the superstition about 666 may all be for naught. The State of NM changed NM Highway 666 between Gallup and Shiprock to US Highway 491 a few years ago so they wouldn’t be mixing church and state.

So when Bruce and I were discussing what I should do for photos for this special post, he gave me the idea to google 666 Route 66. There are were actually four choices between SW, NW, SE and NE depending on which side on Central Avenue your on, east or west of the railroad tracks. East of the tracks was a hotel or the building the Baptist Convention used to be in. West of the tracks is El Rey Theater and a parking lot. If the Baptist Convention was still at 666 Route 66, that building would have been the photo of the day, but it’s a boring building and I have no history with it. So the El Rey got it. I go way back with the  El Rey. When I was a kid I went to movies there, and about 20 years ago we went to see a band friend liked — the band sucked but our friend was entertaining. Around the same time, we went to a couple of salsa dances, performed flamenco, and  we went to concert by Bela Fleck and the Flecktones at the El Rey. Bela Fleck was fantastic and he changed my opinion of the banjo forever. I still get mail from the Flecktones every now and then.

At lunchtime Bruce and I walked over to the El Rey Theater and he posed for me on the spot that would be 666 Route 66 SW. I used a super-wide angle lens, which made Bruce look a little like the Terminator, which was perfect. The we went around behind the building to find the back wall colorfully painted with an outline of the Virgin de Guadalupe on a back door — super!  Then we photographed our way back to the office through the well painted and graffitied alleys. 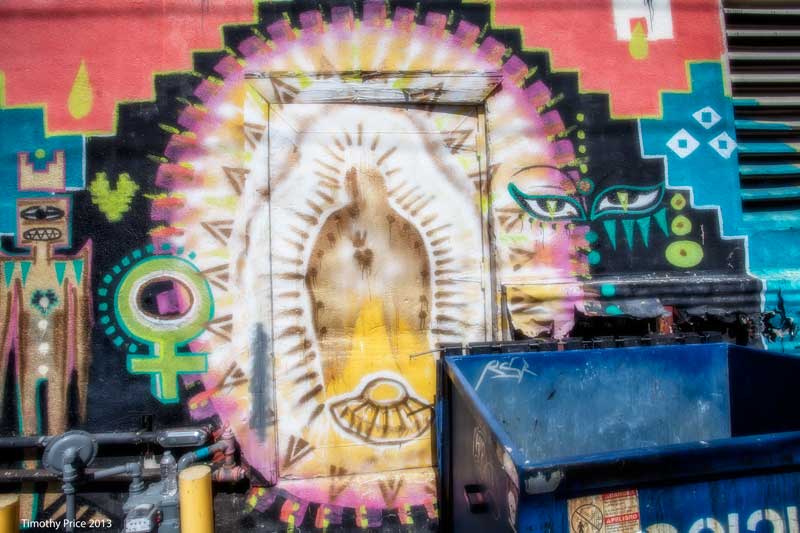