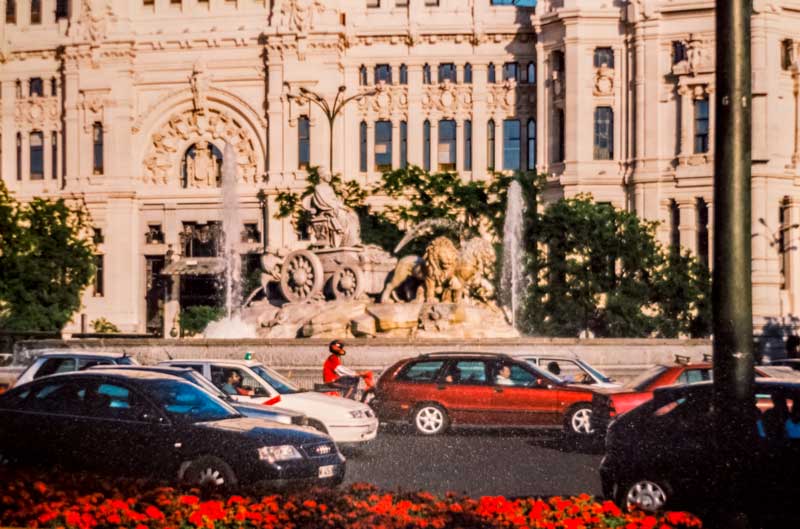 I was a surprised to read my initial reaction to the traffic and driving in Madrid during the first few months after we moved to Spain, because I don’t believe the traffic and driving would not surprise me at all now. While we never had a car during the almost 4 years we lived in Madrid, we rented cars to go out and explore castles, visit villages and cities, and when we drove to Italy and back one Semana Santa. While my initial reaction was that driving in Madrid was a right reserved for natives, I ended up driving in Madrid, all over Spain, all across Southern France, in Rome and all over central Italy before we moved back to the States.

Driving
Driving in Madrid is a right reserved for the natives. It looks awful to try and negotiate traffic. It is difficult to negotiate traffic as a pedestrian here. Everyone drives fast. Holes close up instantly, and the cars do not give pedestrians much right of way. Motorcycles and scooters dart in and out of traffic at high speed. People obey traffic lights better than Albuquerque, there are just a few going through a red light at the last minute. As I had mentioned earlier, the instant the cars get a green light, they are off like they were in a race. The cars have amazing acceleration for small cars. I guess they have a lot more power without all the pollution controls. The traffic actually moves quite well, basically fast and frantic, for the density. It does not matter the size of the street, people drive fast. You can be in the old part of Madrid trying to walk around all the cars parked on the narrow sidewalk, of a narrow street and a stream of cars are moving down the street at 30 to 40 mph or better (they drive up to 60 mph or better on the bigger streets). I really don’t know how the drivers keep from constantly running into each other at the speeds they drive in basically bumper to bumper traffic. During rush hours, police officers are in the streets waiving cars along. If the cars are not moving fast enough, they blow their whistles at the cars and gesture for them to move faster. Parking is a serious problem in Madrid. I often see cars double and triple parked and sometimes around the Prado you can see cars parked on both sides of the roads and in the middle of the street. There is underground parking under every plaza that I have seen so far, and parking garages where spaces can be rented in about every block; and yet there are cars parked everywhere they will fit on every street that is not blocked. Cars are parked along the streets bumper to bumper for blocks. I don’t know how they get them in or out, but they do. The public transportation is excellent and cheap. There is no need to have a car in Madrid.

Most of the cars are fairly new, about the size of my Mazda 323, but mostly French, Spanish, German and Fords. The cars all look similar, with a few strange ones now and then. The motorcycles and scooters vary greatly. There are a lot of scooters of all types, sizes, colors, ages and condition. The motorcycles vary greatly also from small enduro type bikes to large enduros, small run of the mill type bikes to large cafe style bikes. There are also a lot of old vintage type bikes that are rare in the States, such as 60’s and 70’s Montessas, Ossas, Benellis, Ducatis and several I don’t recognize.