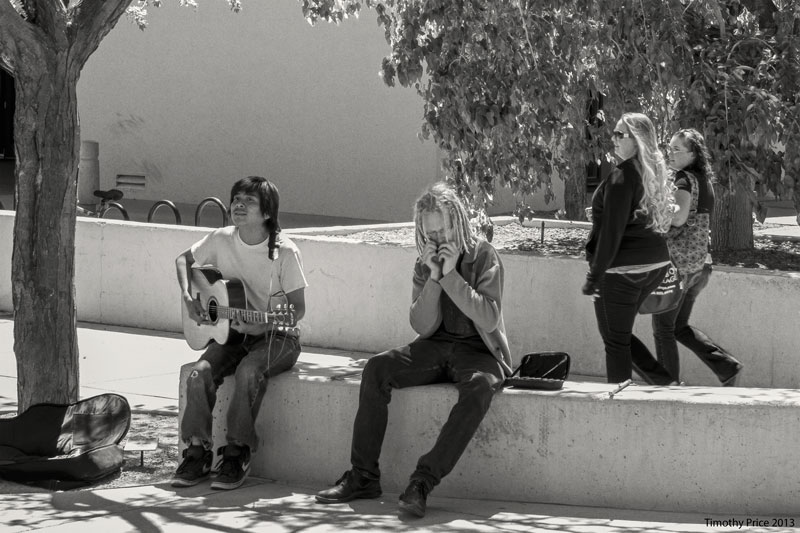 On my way to class on Friday, the young man with the guitar was sitting alone playing and singing at the to of his lungs, and not very well. As I walked by after class, the blonde with the harmonica had joined him in performing a horrible rendition of “Hey Jude” (to be fair, only the singing was really bad, but not terribly objectionable for some reason). They were so involved in the song they didn’t noticed that I had stopped to photograph them, and they were doing the song so badly, they bordered on performance art. As I continued on my way, the guitarist started singing “nah nah nah nana nah nah…” so off key, and out of compas, that I burst out laughing and laughed all the way back to the office.

I took a load of trash to the dump today. I left early and got up to the entrance I’d always turned into and there were no other cars. “Nice!” I thought to myself. As I drove up to the building to pay, the attendant came out and said “The dump entrance is up the road before the light — this is recycling.” He told me to drive straight ahead and follow the road around. I followed the road through about twenty people eagerly waiting for stuff to recycle — they looked disappointed when I drove on by. I got back out on the main road, drove up toward the light, and found a long line of trucks waiting to get into the landfill. Forty-five minutes later I discovered I was in the line for the scale, but I couldn’t change lanes, so I drove onto the scale, walked up to the window and told the attendant that I didn’t need to be weighed. She said “that’s okay, but the people behind you will be mad when they see you turn the other way!” She asked for my license plate number, my proof of residence in Corrales, and driver’s license, then when I went to give her a $5 bill to pay the $4.75 fee, she told me it was a “free day!” “So that accounts for the long line of trucks them?” I asked. She nodded “Yep!” and told me the line would probably go down to the roundabout by noon. If I’d known it was a “free day” I wouldn’t have gone. I would have preferred to pay $4.75 to dump the trash then spend an extra 45 minutes waiting in line to dump the trash. I took the photo of the Sandias on the way home from the dump.